A page for stuff I’ve written. Hope you enjoy.

This article describes a run on a loaded iron ore train on the Mt Newman Mining (now BHP Billiton Iron Ore) heavy-haul railroad in the Pilbara region of Western Australia in 1989. It was published in the April 2005 issue of the Australian journal Railway Digest.

A Long Night On The Long South

This article describes a run on a National Rail Corporation Superfreighter from Junee (on the Melbourne-Sydney main line) into Sydney, NSW, Australia back in 2001. It was published in the April 2008 issue of Australian Railway History. NRC is now known as Pacific National.

[Note: In NSW, the 646-km main line between Sydney and Albury–on the Victorian state border–was know as the ‘Long South’, whereas the 225-km portion that stretched only as far south as Goulburn was known as the ‘Short South’]

The 5-Star luxury tourist rail service–with which I was involved in its construction and introduction into service–was conceived ahead of the forthcoming Kuala Lumpur Commonwealth Games. For a number of reasons–chief among them being a deficient corporate marketing strategy–the service did not survive. However, the rollingstock we (by which I mean the South African Railways at their Salt River Workshops in Cape Town) had built was very acceptable to the exacting standards of the Orient-Express leisure travel company–specialising as they do in the high-wealth, rail-travel afficianado end of the market–and the trainset was eventually purchased by them and shipped to Peru where they now operate it as the Belmond Hiram Bingham… not that you’d know its origin from any of their media. 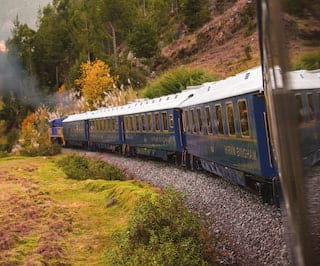 But O-E wouldn’t have it if we hadn’t designed and built it. See the photo of the Peninsular Line train below. The story of its origin is here…

Prior to the advent of ECP braking, remote-controlled distributed power had arguably been the single greatest technological advance for railroading since the introduction of the automatic coupler and the air brake triple valve. Originally having various labels before receiving the proprietary name LOCOTROL, this was the first distributed power scheme to be proven in regular service and for 40 years was the only practical application of the technology. This is that story.

Distributing locomotive power throughout the length of a long, heavy train and controlling those dispersed locomotives remotely, shares the motive force throughout the train rather than concentrating it all at the head-end. The technology provides a railroad with the tools to multiply the carrying capacity of trains without adding expensive trackage. With synchronous traction and braking control, the system provides the locomotive engineer with opportunities to handle trains more safely and effectively, especially in mountainous territory. Many railroads have found that it is the only solution to increasing network capacity other than to install duplicate or triplicate trackage.

The author takes the reader through the early history and evolution of the concept, how it came to be used around the world, how Locotrol trains are constructed and operated, how an overseas installation project is conducted, how a locomotive engineer handles a Locotrol train, and many other aspects of the development of this unique concept.

* A descriptive summary that illuminates the development of railway air braking and its global evolution from inception to the present day, including the disruptive new technologies of Distributed Power and ECP. * A historical account of the creation of railway air braking that explores the incremental development of associated railcar operating and locomotive engineer's brake valves, and how these devices have been applied. * A plenary work of thorough research containing exhaustive information and unabridged facts and history never previously collated in a volume of this scope. * Foreword is by an eminent railway consulting engineer. * Contains crucial complementary footnotes and a comprehensive Table of Contents. * Offered to serious, consummate followers of railway operations. * Recommended reading for both the enthusiastic railroader and the railroad enthusiast. * Priced at AUD110 (plus p&p) from the author, this A4-sized book has 442 pages plus 300 illustrations and diagrams, and can be ordered via the email address on the Contact page.

The evolution of DP

A history of Locotrol and railroad distributed motive-power. Priced at AUD70 (plus p&p), this A4-sized book has 295 pages and over 260 illustrations and diagrams, is available from the author (see Contact page) and will soon also be available from book distributors and retail outlets. I hope to have book reviews here in due course.

Scroll down to read a description at left.

“A monumental record of an important railroad technology and the background of the people who made it successful.

An immense compilation and a critical (and long needed) piece of railroad technology documentation.”